This also applies to garbage collection tuning. When it comes to detecting whether or not you are suffering from GC-induced latency or throughput issues, you do not really need a profiler. The tools mentioned in previous chapters (jstat or raw/visualized GC logs) are quicker and cheaper ways of detecting whether or not you have anything to worry about in the first place. Especially when gathering data from production deployments, profilers should not be your tool of choice due to the introduced performance overhead.

But whenever you have verified you indeed need to optimize the impact GC has on your application, profilers do have an important role to play by exposing information about object creation. If you take a step back – GC pauses are triggered by objects not fitting into a particular memory pool. This can only happen when you create objects. And all profilers are capable of tracking object allocations via allocation profiling, giving you information about what actually resides in the memory along with the allocation traces.

Allocation profiling gives you information about the places where your application creates the majority of the objects. Exposing the top memory consuming objects and the threads in your application that produce the largest number of objects is the benefit you should be after when using profilers for GC tuning.

Bundled with the JDK distribution is hprof profiler. As it is present in all environments, this is the first profiler to be considered when harvesting information.

To run your application with hprof, you need to modify the startup scripts of the JVM similarly to the following example:

On application exit, it will dump the allocation information to a java.hprof.txt file to the working directory. Open the file with a text editor of your choice and search for the phrase “SITES BEGIN” giving you information similar to the following:

From the above, we can see the allocations ranked by the number of objects created per allocation. The first line shows that 64.43% of all objects were integer arrays (int[]) created at the site identified by the number 302116. Searching the file for “TRACE 302116” gives us the following information:

Now, knowing that 64.43% of the objects were allocated as integer arrays in the ClonableClass0006 constructor, in the line 11, you can proceed with optimizing the code to reduce the burden on GC.

JVisualVM makes a second appearance in this chapter. In the first section we ruled JVisualVM out from the list of tools monitoring your JVM for GC behavior, but in this section we will demonstrate its strengths in allocation profiling.

Attaching JVisualVM to your JVM is done via GUI where you can attach the profiler to a running JVM. After attaching the profiler:

After completing the steps above, you are exposed to information similar to the following: 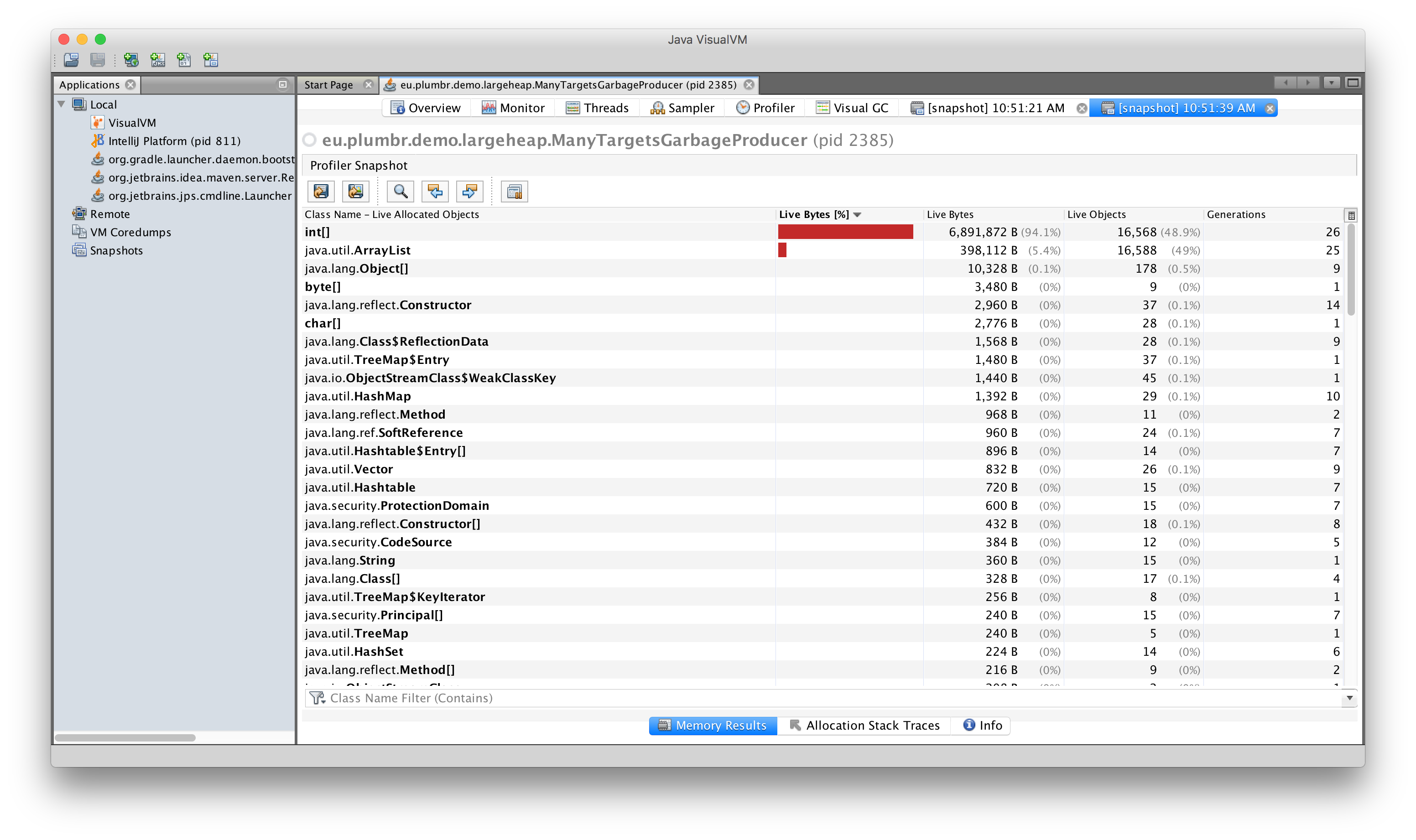 From the above, we can see the allocations ranked by the number of objects created per class. In the very first line we can see that the vast majority of all objects allocated were int[] arrays. By right-clicking the row you can access all stack traces where those objects were allocated: 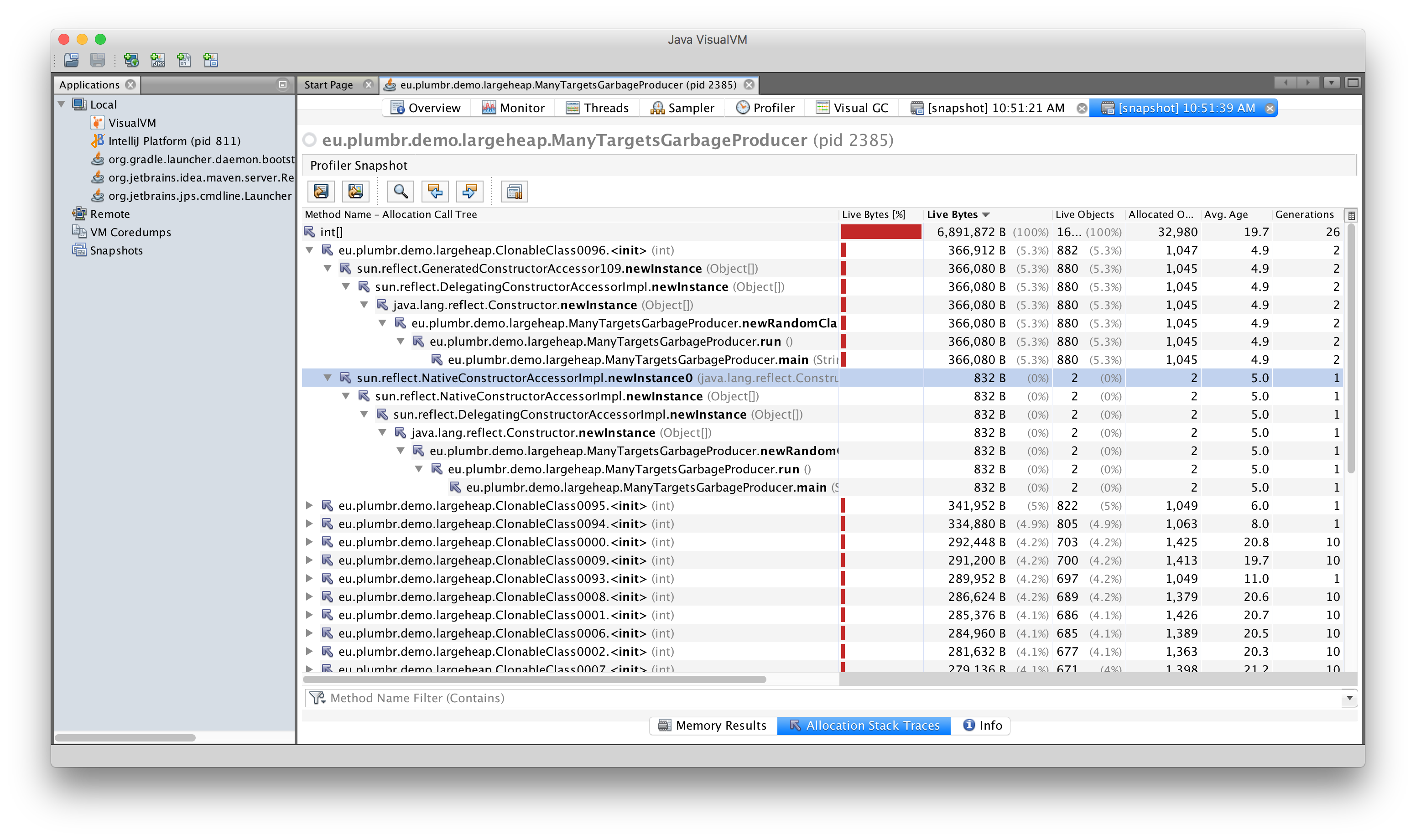 Compared to hprof, JVisualVM makes the information a bit easier to process – for example in the screenshot above you can see that all allocation traces for the int[] are exposed in single view, so you can escape the potentially repetitive process of matching different allocation traces.

Last, but not least, is AProf by Devexperts. AProf is a memory allocation profiler packaged as a Java agent.

To run your application with AProf, you need to modify the startup scripts of the JVM similarly to the following example:

Now, after restarting the application, an aprof.txt file will be created to the working directory. The file is updated once every minute and contains information similar to the following:

In the output above allocations are ordered by size. From the above you can see right away that 80.44% of the bytes and 68.81% of the objects were allocated in the ManyTargetsGarbageProducer.newRandomClassObject() method. Out of these, int[] arrays took the most space with 40.19% of total memory consumption.

Scrolling further down the file, you will discover a block with allocation traces, also ordered by allocation sizes:

From the above we can see the allocations for int[] arrays, again zooming in to the ClonableClass0006 constructor where these arrays were created.

So, like other solutions, AProf exposed information about allocation size and locations, making it possible to zoom in to the most memory-hungry parts of your application. However, in our opinion AProf is the most useful allocation profiler, as it focuses on just one thing and does it extremely well. In addition, this open-source tool is free and has the least overhead compared to alternatives.