Announcing our biggest release so far

Last months have been busy in Plumbr. We have been polishing the next major release capable of monitoring applications built using microservices and deployed in large clusters. In parallel, several other significant changes to the product were introduced. As of today, we are happy to announce the general availability of the release. In the next sections I will walk you through the new features and changes.

First and foremost – the key goal of Plumbr is still the same. We are all about monitoring the end user interactions with the application. 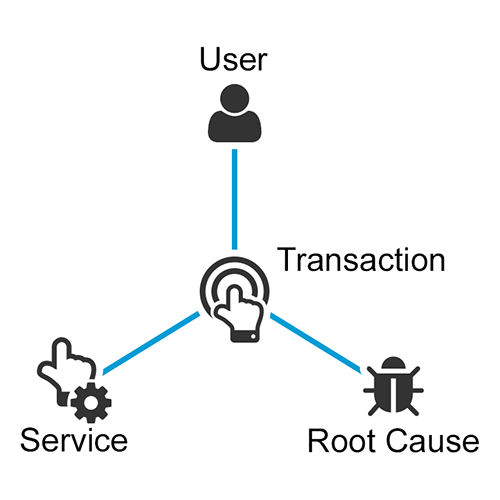 Such interactions are linked with the application/service endpoint used and user identity performing the interaction.

In addition, when the interactions end up being too slow or failing altogether, Plumbr exposes the root cause for the poor user experience.

However, there are two new concepts and lots of smaller changes helping you to get even more out of our monitoring solution.

When your application architecture includes multiple JVMs servicing the same transactions, Plumbr is now capable of linking the transaction spanning across all the JVMs involved in processing.

To illustrate the concept, let us take a look at the following example where user is interacting with the front end via http://billing.my.com interface, unaware that in the backend there is a total of five JVM servicing his request:

You experience when analyzing an individual user interaction consuming multiple microservices in the back-end would match the situation in the following screenshot:

The solution is currently limited to HTTP-based integrations, for which Plumbr injects a custom HTTP header into the outbound request. This header includes a transactionID used to link individual spans together. This means that when the call between JVMs is carried out via other protocols (RMI, JMS, etc), Plumbr will not be able to build the link just yet.

So far, Plumbr has been all about monitoring individual JVM. As the deployments often involve whole clusters of JVMs servicing inbound traffic for the same application, we have introduced a new concept called — surprise — the Application.

The change means that the information from complex deployments is exposed in a unified manner. This is best explained by looking at the following example:

In a sense, Application will largely replace the concept of JVM you were used to so far. Better yet, it is both more powerful and more convenient to work with.

General concept is still the same. Plumbr user interface allows you to see the interactions your end users performed either via the familiar Service, User and Root Cause or the two new concepts, Application and Job.

However, when exploring the new UI, you will notice that Plumbr is now allowing you to get more information in every list of items. It is now possible to add secondary dimensions to all lists. This allows you to get answers to questions like “Show me which services this particular user has accessed last week” or “show me which users all these lock contention issues are impacting”.

When investigating a single entity, the experience of a particular user, behavior of specific service / application or impact of a root cause can be visualized in different ways – either via transactions/users in time, percentiles or latency distribution:

The single transaction view is also somewhat different, including the spans from multiple nodes participating in transaction: 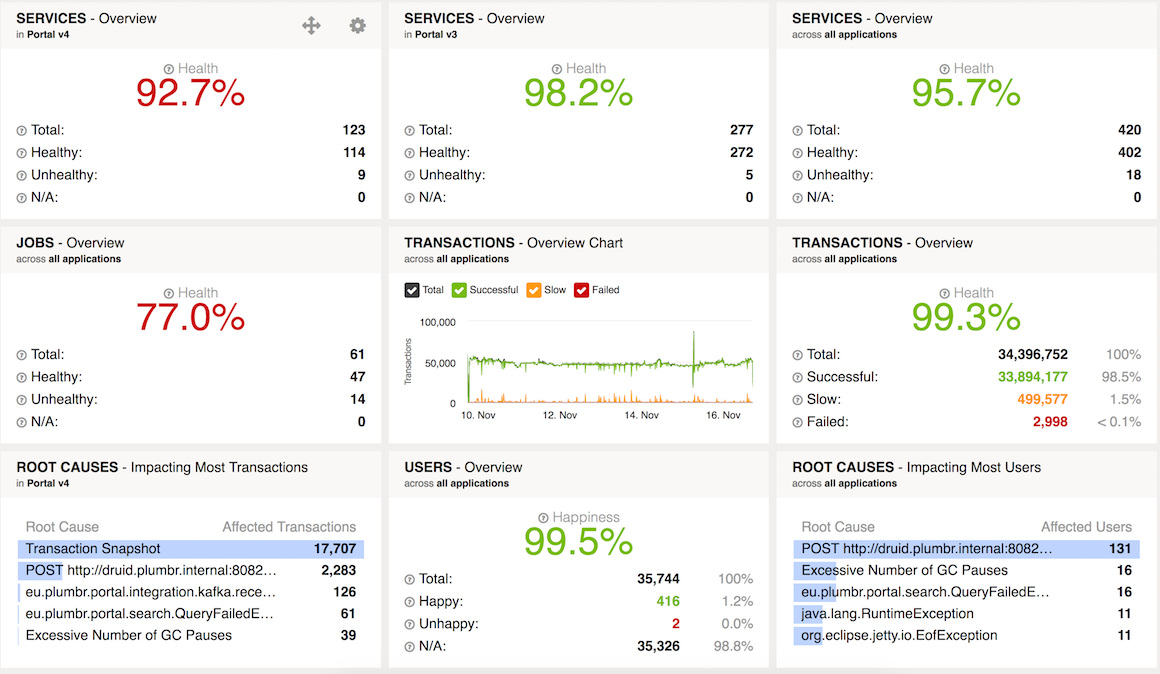 These two changes mean that different teams being responsible for different applications can now create the dashboard containing only relevant information for the particular team.

To solve the problem, Plumbr now segregates the transactional services from scheduled jobs. With the change, the direct user impact to user experience via transactions is more clear and the visibility to scheduled jobs is preserved.

Change in the JVM concept.

With the introduction of applications, JVMs got somewhat demoted. For example, JVMs no longer expose users accessing the JVM nor services published from the JVM. This information is now present in the application view instead.

JVMs are still present and still expose valuable information, such as jobs launched in the JVM, root causes detected in the JVM and the technical telemetry harvested from the particular JVM.

The concept of downtime got redesigned in different aspects:

Alerts sent out by Plumbr got redesigned to accommodate other changes. First and foremost, you can no longer register alerts to individual JVM downtime events. Instead, a concept of application downtime is an equivalent source for alerts.

Introduction of the application also made it possible to subscribe to alerts from particular application only. For example, use cases like the following are now possible:

Minor changes in alerts include the removal possibility of subscribing to alerts from a single service. The feature was almost not used, so we removed it. In addition, alerts now communicate the number of users impacted, besides the impact in transactions.

If you are currently using Plumbr, we are encouraging to start exploring the more powerful new Plumbr available at https://app.plumbr.io. Log in using the same credentials as you are used to so far. Pay attention to the fact that this version of our product is compatible only with Agents 16.10.03 and newer, so you might need to go through the Agent version upgrade to benefit from all the new goodies.

Previous version of our product is still available at https://portal.plumbr.io until 31.12.2016.

If you have not yet used Plumbr to monitor your JVM-based applications, go ahead and grab your free trial. Make the end user experience transparent and start fixing the root causes for poor performance already today!