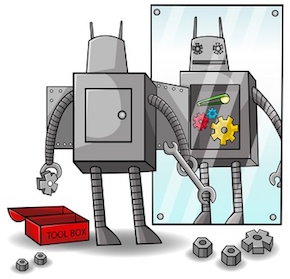 This post is an example about an application where the first solution to each and every IT problem – “have you tried turning it off and on again” – can backfire and do more harm than good.

Instead of turning things off and on, we have an application that can literally heal itself: it fails at the beginning, but starts running smoothly after some time. To give an example of such application in action, we recreated it in the most simple form possible, gathering inspiration from what is now a five-year old post from the Heinz Kabutz’ Java Newsletter:

The code above is allocating two bulks of memory in a loop. Each of those allocation is equal to 60% of the total available heap size. As the allocations occur sequentially in the same method, then one might expect this code to keep throwing java.lang.OutOfMemoryError: Java heap space errors and never successfully complete the allocateMemory() method.

So, lets see whether our expectations are correct by starting with the static analysis of the source code:

Our static code analysis has shown us that for two underlying reasons, the presented code should not run successfully and in one case, it should. Which one out of those three is the correct one? Let us actually run it and see for ourselves. It turns out that both conclusions were correct. First, application fails to allocate memory. But after some time (on my Mac OS X with Java 8 it happens at iteration #255) the allocations start succeeding:

In order to understand what is really happening we need to think, what changes during program execution? The obvious answer is, of course, Just-In-Time compilation can occur. If you recall, Just-In-Time compilation is a JVM built-in mechanics to optimize code hotspots. For this, the JIT monitors the running code and when a hotspot is detected, JIT compiles your bytecode into native code, performing different optimizations such as method inlining and dead code elimination in the process.

This will generate a log file, in our case named hotspot_pid38139.log, where 38139 was the PID of your java process. In this file the following line can be found:

This means, that after executing allocateMemory() methods 256 times, C1 compiler has decided to queue this method for C1 tier 3 compilation. You can get more information about tiered compilation’s levels and different thresholds here. And so our first 256 iterations were run in interpreted mode, where bytecode interpreter, being a simple stack machine, cannot know in advance, if some variable, bytes in this case, will be used further on or not. But JIT sees the whole method at once and so can deduce than bytes will not be used anymore and is, in fact, GC eligible. Thus the garbage collection can eventually take place and our program has magically self-healed.

Now, I can only hope none of the readers should actually be responsible for debugging such a case in production. But in case you wish to make someone’s life a misery, introducing code like this to production would be a sure way to achieve this.

This post was originally published in the 2014 Java Advent Calendar.

This code for allocation of memory in a loop is a useful source of self healing JVM.