This is the last post in series where we analyze the results of the Java Performance Tuning Survey we conducted in October 2014. If you have not read the first posts, I recommend to go through the following first:

This post is opening up some interesting correlations found in the data and summarizing the results.

Reproducing is a key to quick success

In another question we asked “How long does it take to find and fix the issue you were facing”. On average, this took 80 hours. We analyzed, whether to the 27% who were not able to reproduce the issue were struggling more. Results were clear:

The difference is clearly visible. The cause for the difference is hidden inside the troubleshooting process. To fix an issue, you need evidence, typically gathered from various sources, such as log files, thread dumps or heap dumps. But you can only get the evidence if you are able to reproduce the case, preferably at will. If you cannot reproduce the problem, you are left without evidence and the only tool in your arsenal tends to be the good old trial and error. Facing a 100,000+ lines of code, you are doomed to face a lot of failed trials along the way.

Some issues are tougher than others.

Respondents also gave us the underlying root cause for the performance issue they were solving. We looked into the different issues in order to understand whether some of the issues are harder to solve than others

Let us again recall that average time to find and fix the issues was 80 hours. When categorizing by the issue type, we found the following: 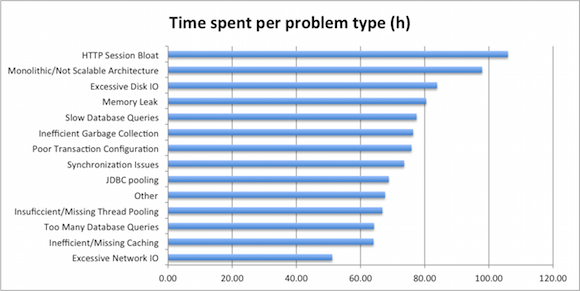 Looking at the extremes, it should not actually be surprising. When your architecture is causing performance issues, then the fix itself tends to be complex and time-consuming, thus requiring more time to fix. And when you tend to abuse the network, it often boils down to a single malicious call, which you can rather easily isolate and fix.

Next, we analyzed the tools and techniques used to troubleshoot certain underlying root causes. We noticed that on average, users try out no more, no less than four different tools to gather evidence and find the root cause. Most popular tools and techniques involved log analysis, heap/thread dumps and profilers.

When we looked the usage of tools across different underlying problems, we became truly surprised. There was very little correlation in between the underlying problem and tools used to troubleshoot – the same tooling was listed with the same frequency independent of the problem at hand.

It is tricky to draw a conclusion from this data, but it appears that the evidence gathering and analysis process is very informal and involves using the tools and techniques this particular person has used or has heard of before.

This survey was conducted to steer further Plumbr development. Main conclusion for us is built upon four key outcomes of the survey:

We promise to take it from here and offer a solution to the issues listed above. Using Plumbr to monitoring your systems pinpoints you to actual underlying root cause immediately, completely skipping the “trying to reproduce – gathering evidence – interpreting evidence” cycle:

Our current offering allows this for thread locks, inefficient GC and memory leaks, but we keep expanding our offering, so that you will have a safety net in place for all the performance issues affecting your JVM.