4This is a second post in series where we analyze the results of the performance tuning survey conducted in October 2014. If you have not read the first part yet, we recommend to start here. Second part will focus on monitoring Java applications for performance issues. In particular, we try to answer the following questions:

Finding out about the performance problem

Before investigating any performance incidents one needs to be aware it exists. We asked to describe the channels through which the respondents discovered the presence of the problem. 284 people responded by listing 406 channels: 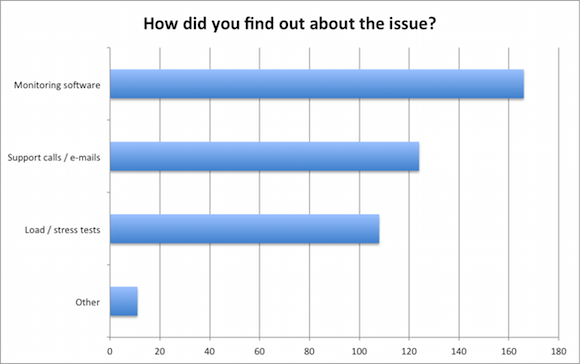 Considering that most of our respondents were from the engineering side, we were truly surprised that more than 58% of the respondents listed monitoring software as the source for awareness. At the same time, just 38% had load/stress tests to alert them about it.

This data is verifying what we see during our daily job – most of the companies do not have the possibility to run load tests – creating and maintaining such tests takes time and is often skipped.

The eleven respondents categorized as “Other” were mostly referring to procedural activities, such as external performance audits taking place.

Symptoms of the performance problem

With this question we wished to understand the symptoms of the problem. 284 respondents listed 462 symptoms as an answer to this question: 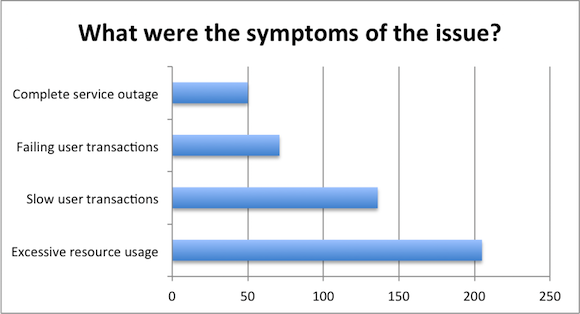 By far the most common symptom triggering the further research is excessive resource (such as CPU, memory, IO, etc) usage. 205, or 72% of the respondents listed this as one of the symptoms. Apparently monitoring end user transactions is less widespread – with its more complex setup the majority of the systems are still monitored from the resource side without having the end user transactions in mind.

On the other hand, the severity of the performance-related issues is well illustrated with the fact that for 17% of the respondents learned about issue only after a complete service outage.

Next in line we were after understanding whether the issue at hand was affecting end users. 284 responses gave us the following insight: 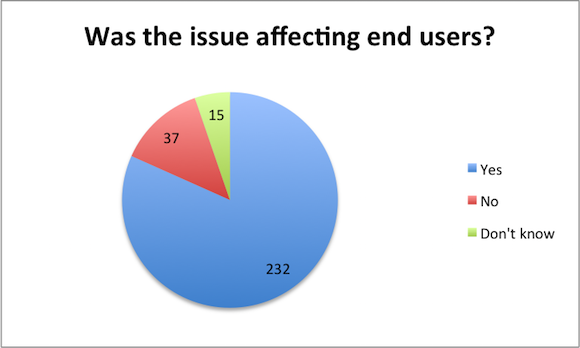 The 82% of the respondents answering “Yes” verified our gut feeling – performance is getting attention only when the related issues start impacting end users. Business side tends to focus on adding new / improving existing functionality leaving non-functional requirements such as performance without the attention they might deserve. And only when the impact on performance is so significant that end users start complaining, some resources get allocated to overcome the issue at hand.

One of the potentially most intriguing insights from the survey was the current monitoring landscape – we asked the respondents to identify the monitoring solutions they are using in production site. 284 respondents listed 365 tools being used as some respondents were using up to five tools to monitor their deployments: 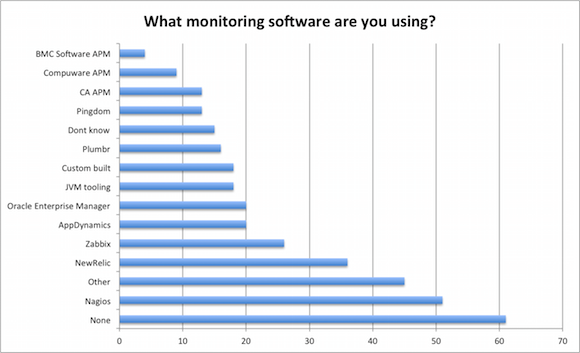 The places on the podium are somewhat surprising:

What is also worth mentioning is the amount of self-built solutions and JVM tooling. Self-built solution option was not even among our list of answers, so having 6% of the respondents building their own monitoring solutions is somewhat surprising.

The tail of the results contains tools mentioned four or more times. It is rather weird to see the large APM vendors (CA, Compuware and BMC) being beaten by the simplest tool possible – namely Pingdom.

As the survey was listed on our site, we do admit that Plumbr position in this list is most likely biased, so take our place in this list with a healthy grain of salt.

If the results were interesting, subscribe to RSS or Twitter feeds, we share more results from the survey (describing troubleshooting tools used and most common root causes) during the following weeks.

I would regard the last list as a hall of shame not a hall of fame. The people who took the survey reported a major impact on user experience despite the usage of those monitoring tools.

I guess it is more or less confirming our doubts that both the processes and tools in the domain are not mature enough. Whenever a performance incident is triggered, an “ad-hoc-case-by-case” process is initiated without clear understanding whether and when it will solve the underlying problem.

In more mature organizations there are safety nets and processes in place to contain the user impact (rolling out changes partially, immediately rolling back changes with performance issues, (temporarily) (automatically) scaling up or out the servers et al, but I have only seen handful of teams applying such measures.