TL;DR; If you have been struggling to find a solution which would keep an eye on the scheduled jobs in your application, just go and grab the latest Plumbr Agent and start monitoring the job activity.

In case you are wondering what such jobs are in the first place and whether or not it is even important to monitor them, bear with me for the following pages and you will understand the concept, related problems and our solution.

What are scheduled jobs?

You can think of a job as a single encapsulated function call. A job can for example check whether there are any new images present in the particular folder in the file system and resize/crop all the images found to fit with the layout used on your website.

Now if we would schedule the image resizing function to be run once a minute, we would have an example of a scheduled job. The schedule can be set to anything – jobs can be scheduled to be run hourly or daily or only on 29th February on leap years.

But why on earth would you make my app more complex by including job schedulers? Why couldn’t you do all the stuff during the user-initiated transaction? Indeed, if you can, you should do just that. You should consider using scheduled jobs usually when either of the following patterns are detected in the application:

So I guess you are now convinced that jobs have their role to fulfill in many of the applications out there. The rise of microservices has decoupled some of the jobs from the monoliths, but the nature of these microservice-embedded jobs has not changed. They are still just functions launched periodically.

The guestimate is also confirmed by our statistics – before building the feature, we analyzed the data and discovered that 26% of the applications analyzed in our sample did indeed have scheduled jobs embedded.

Why would I need to monitor such jobs?

Many of the scheduled jobs perform truly important functions without which the application would start malfunctioning. To understand this, let’s take a look at the following examples:

So it is clear that jobs play an important role in most architectures. It is also clear that it might make sense to keep an eye on all the jobs, making sure the job would not fail nor complete too slowly.

How will Plumbr help you?

Plumbr will keep an eye on all java.lang.Runnable and java.util.concurrent.Callable instances submitted to a java.util.concurrent.ScheduledExecutorService. The instances can be submitted directly or via any convenience wrappers around ScheduledExecutorService, e.g. org.springframework.scheduling.TaskScheduler. Alternative schedulers, like Quartz, are not yet supported by Plumbr.

Each such instance submission to scheduler is a separate job Plumbr will be tracking. Plumbr will monitor the payload methods (run()/call()) of the job both for correctness and duration. Based on this, the job instances can end up in three statuses:

The job is given a name so you can immediately distinguish between different jobs. In case of a Spring framework, if @Scheduled annotation is used on a method, then the method name with the name of its containing class will be used. In all other cases the name of the class implementing Runnable or Callable is used. To distinguish the jobs from the services with transactional nature, the job identifier is prefixed by ‘JOB:’.

When this bean is deployed to an application monitored by Plumbr, the scheduled method invocations to saveMinuteStats() and purgeDeadJvms() are detected as jobs by Plumbr:

Exposing the details of the job, a familiar picture is seen – the time-series data about the job invocations, latency distribution chart representing the duration the jobs took to complete and root causes for slow and failed job instances: 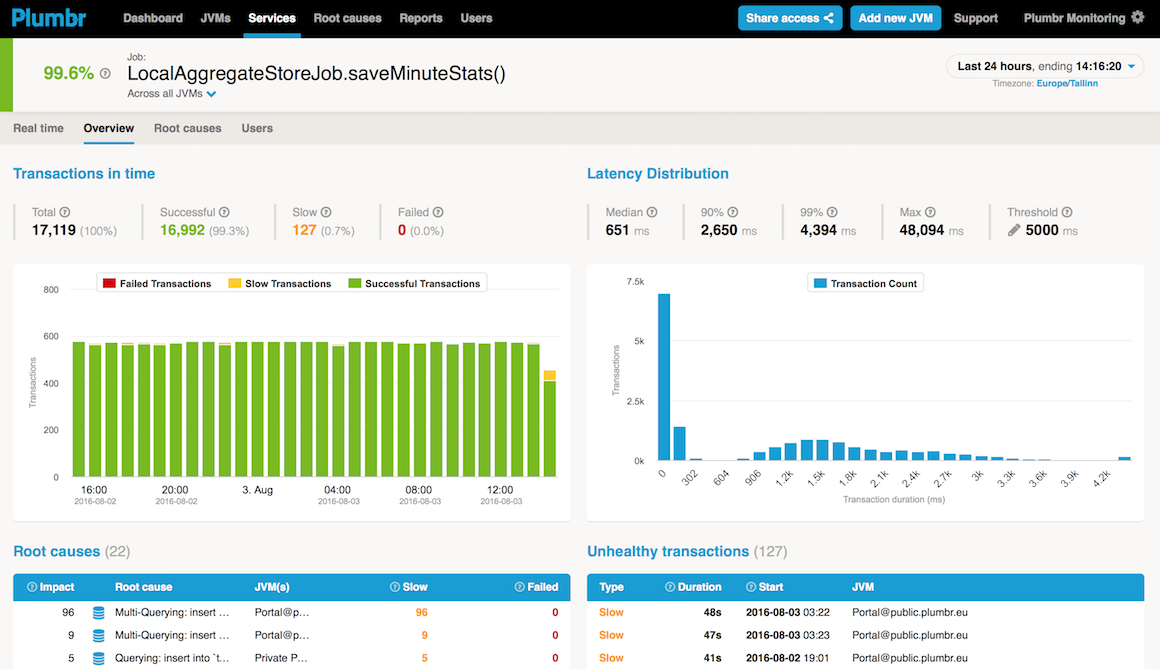 So now that you are familiar with how we can expose even more insight from your applications, just go ahead and either upgrade the Plumbr Agent if you are an existing user of Plumbr or grab your free trial to start really improving the performance of your applications.

Do you have plans to add support for quartz

Indeed, we will end up supporting Quartz eventually as well. I have no release date yet to publish however.