Solving OutOfMemoryError (part 6) – Dump is not a waste

Let us continue our series of posts about solving the OutOfMemoryError in our hypothetical production system. We have described  different methods to tackle the problem, and today’s post concentrates on what you can learn from heap dumps. Spoiler alert: with a bit of luck, you can get very close to solving the OOM.

In retrospect, these are the methods we have already tried:

None of them actually helped us solve the actual cause of the problem. Today we will try the next weapon in our arsenal: the memory dumps and the tools that help you work with them – the memory dump analyzers.

Analyzing dumps is the most universal way of solving OutOfMemory problems and, until Plumbr came to existence, was the only reliable way. In this post I will use Eclipse MAT, since that is the tool I have the most experience with – but you can take a similar approach with any other similar tool.

Just one more remark before we begin – note that some authors use the term “heap dump” for describing memory dumps. In the Java world, most of the time heap dump and memory dump mean the same thing. I in this post I will use them both interchangeably.

What is a “memory dump”?

Memory dump is a snapshot of Java Virtual Machine’s memory, taken at one specific moment. Usually it is saved on the disk for further analysis.

Using the dump, JVM memory contents can be investigated at developer’s leisure, using a wide range of tools, in the developer’s comfortable environment far away from the sensitive production site. The ultimate goal of that investigation is to find objects that consume too much memory and where those objects are being held in the running application.

The practical examples below will once more be based on our sample leaking PetClinic application, distributed with the Plumbr release package.

How can you create the memory dump?

The memory dump can be created in two ways:

This is how acquiring a memory dump with the Eclipse MAT tool looks like: 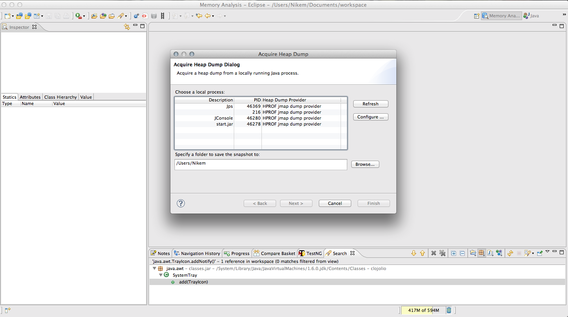 I should note here, that the making of a memory dump usually means “freezing” your application memory, in a similar way to a full garbage collection. As a result, your application does not respond to users’ requests during that time. How long does it take? A little bit more than needed to write raw data in the amount corresponding to you application’s heap to your server’s hard disk. In some cases it may take up to a few minutes.

Analysis of the memory dump

Alright, now the memory dump is done, and transferred from production site to the developer’s machine. When you open it with MAT, you get the following picture (after some lengthy process of parsing that multi-gigabyte file): 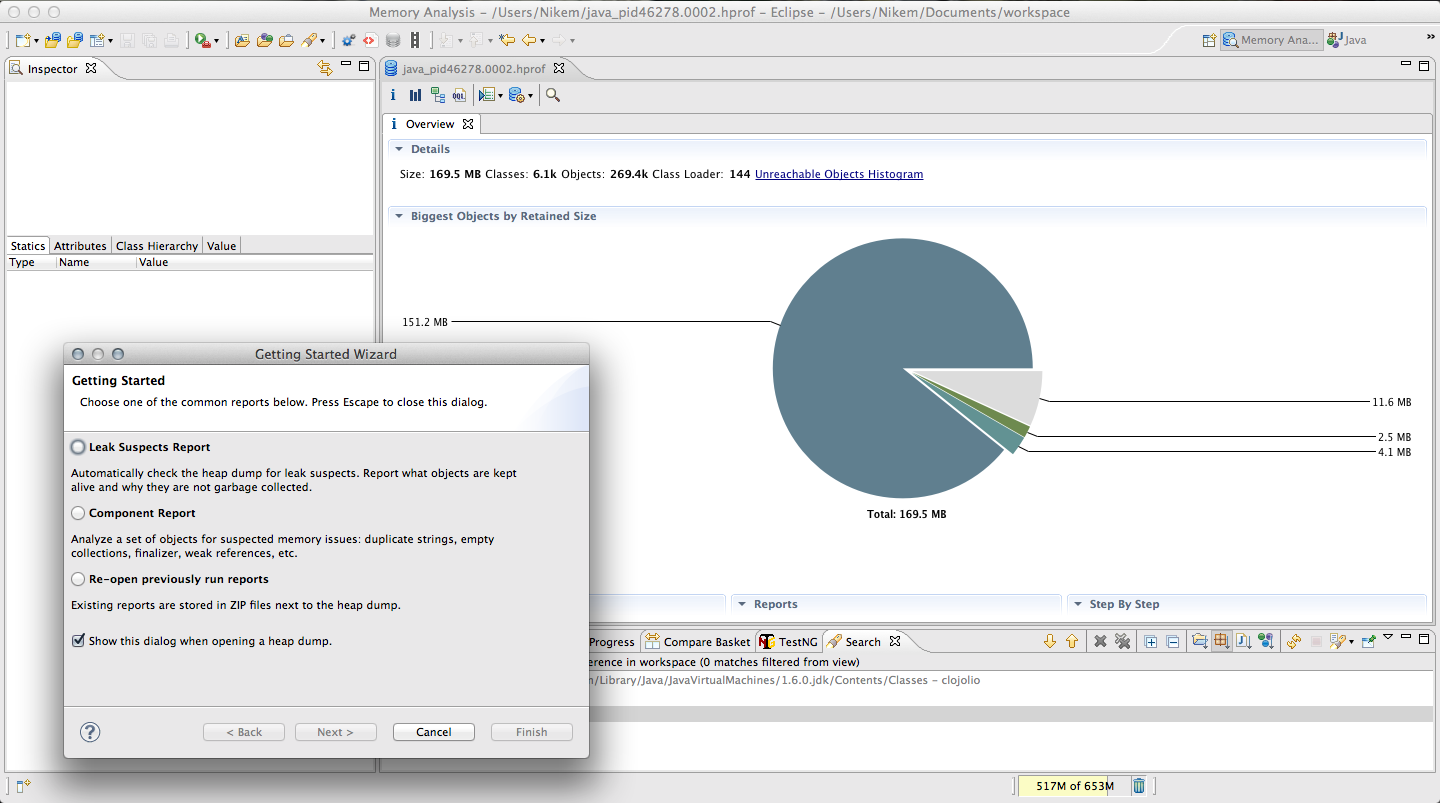 On the background you can see a visual representation of the heap dump with the fattest objects highlighted. We will get to that shortly. On the foreground the MAT tool proposes some “Getting started” options. For the time being let’s select the first one, “Leak Suspects Report”. After some analysis your MAT will show you this: 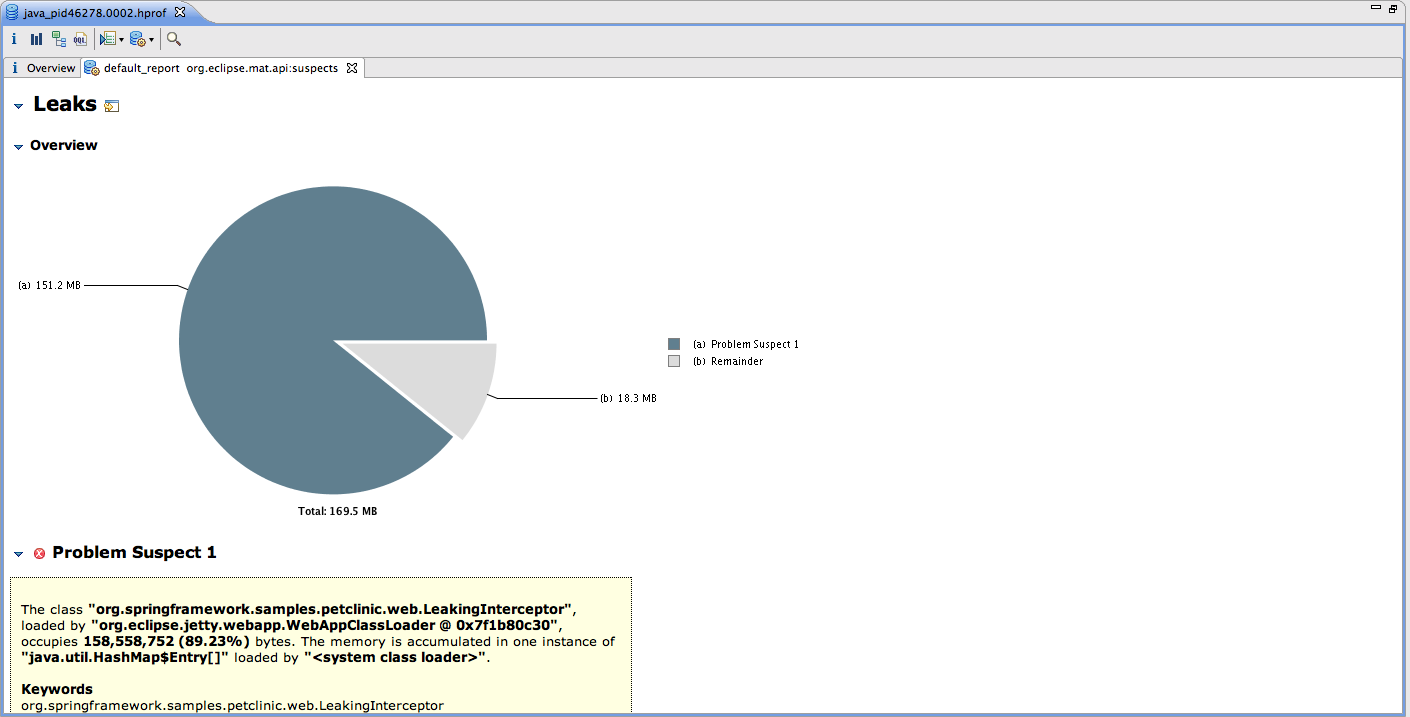 As you can see, MAT has found one leak suspect, which occupies 89% of application’s memory, taken by instances of class org.springframework.samples.petclinic.web.LeakingInterceptor. If you click on the “Details” link you will see some more info about where the instances reside and why they are so big.

Now let us come back to that pie MAT displays when you open the dump. 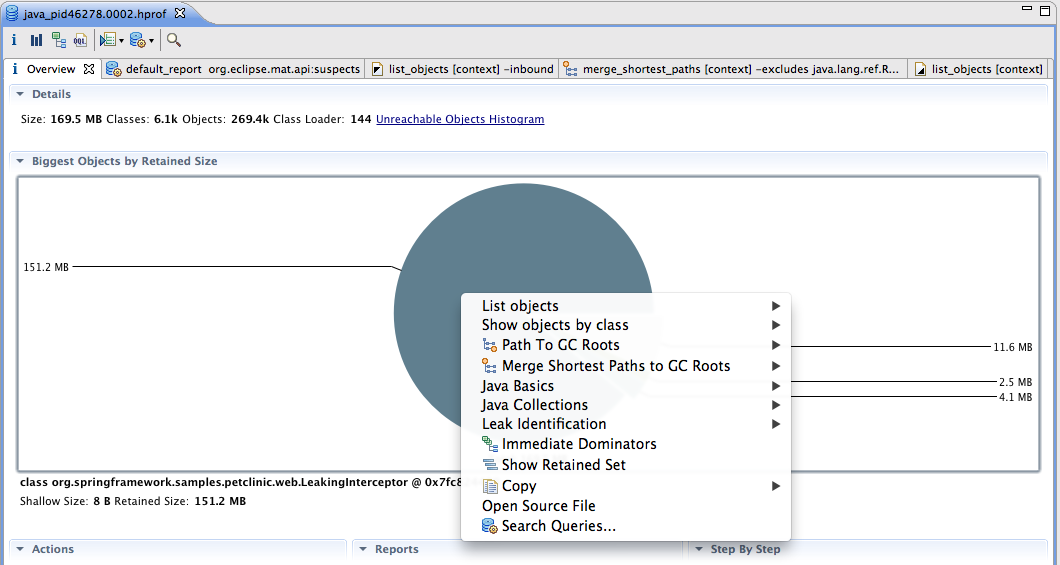 When you click on the largest slice, you can select “Paths to GC Roots” or “Merge Shortest Paths to GC Roots” in order to find what is holding that large amount of instances. Or click on “List objects with outgoing references” to see what has been accumulated in it. In my experience the above info is all you need to go to your source code and start thinking about fixing the bug.

However, on a final note I would like to point out that memory dumps are not silver bullets. Working with them has some disadvantages as well.

We are approaching the end of the blog post series on Solving the OutOfMemoryError. There will be a couple of more posts on the tools you can use, and then a summarizing post drawing the conclusions. If you want to be notified of the next articles, follow @JavaPlumbr in Twitter or the RSS feed. If you want to contribute, describe your best tips on how you find and solve memory leaks in the comments! Or better yet – try out Plumbr (see the box on the right) and let us know how you like it!

Aggressive blog writing from the ground reality. Such an energetic read. Kudos !

the image can’t show normally,can you fix it

Thank you for noticing – apparently the last infrastructure update lost some images from our blog posts from 2011-2012. We are looking whether we can restore or recreate the images this week.

Recovered the images, now all posts should contain the referred screenshots.

Maybe it will be great to add that OutOfMemoryError generates only one heap dump file on the first error.

Thanks for pointing it out, made a change in the post!

MAT requires almost as much heap as the dump file itself. But ParseHeapDump script, that comes along with MAT, does the job of parsing and creating indices in a short span of time. All that you have to do is to copy the generated indices and the dump file to your local machine and open it with MAT. Now you don’t require large heap to analyse the reports. Voila!!! In our production servers, once the application crashed with OOM and generated a 30 GB heap dump. In a matter of 2 hrs, we were able to parse the heap dump with the script( we gave -Xmx35g). The generated indices(10 files in total I guess) were of 25g as a whole. But after tar.gz ing the heap dump and indices, the resulting file was around 20g. After transferring it to the local machine(local network was super fast ~50Mb/s), we analyzed the dump using MAT and finally found the root cause. Not to boast, all this took around 4-5 hrs!!!!

It’s true that MAT needs >= the dump size as own memory to parse it, and that it needs that on the developers workstation. But this is not true for all available dump anaylzers.nnHave a look at http://dr-brenschede.de/bheapsampler if you want to try something completely different.

Eclipse MAT is a good tool. I used it once to debug a production application that was running out of memory because of a Hibernate Session. I eventually found out that the said app had functionality that was performing a massive all or nothing batch update with Hibernate