How much memory do I need (part 1) – What is retained heap?

How much memory will I need? This is a question you might have asked yourself (or others) when building a solution, creating a data structure or choosing an algorithm. Will this graph of mine fit in my 3G heap if it contains 1,000,000 edges and I use a HashMap to store it? Can I use the standard Collections API while building my custom caching solution or is the overhead posed by them too much?

Apparently, the answer to the simple question is a bit more complex. In this post we’ll take a first peek at it and see how deep the rabbit hole actually is.

The answer to the question in the headline comes in several parts. At first we need to understand whether you are interested in shallow or retained heap sizes.

The shallow heap is easy – it consists of only the heap occupied by the object itself. There are some nuances to how to calculate it, but for the scope of this article we leave it as is. Stay tuned for future posts on the same topic.

The retained heap is in many ways more interesting. Only rarely are you interested in the shallow heap, in most cases your actual question can be translated to “If I remove this object from the memory, how much memory can now be freed by the garbage collector”.

Now, as we all remember, all Java garbage collection (GC) algorithms follow this logic:

Now to illustrate how to calculate the retained heap, let’s follow the aforementioned algorithm with the following example objects: 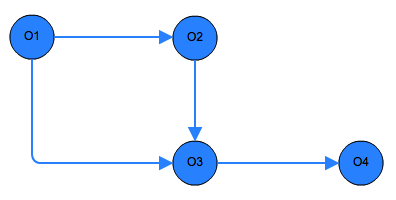 To simplify the sample, let’s estimate that all the objects O1-O4 have the shallow heap of 1024B = 1kB. Lets start calculating the retained sizes of those objects.

Which implications does this have in practice? In fact, understanding the differences between shallow and retained heap sizes makes it possible to work with tools such as memory profilers and heap dump analyzers – for example digging into Eclipse MAT might prove to be impossible if you don’t know how to distinguish these two types of heap size measurements.

Full disclosure: this post was inspired by Patrick Dubroy’s talk on Google I/O, which you can watch in full length here.