This is the second post where we open up the yearly statistics about the environments Plumbr Agents end up monitoring. In the first post we opened up the Java version market share, in this post we share data about most popular Java EE containers being used.

This year our conclusions are based on 758 different JVMs that Plumbr monitored during February and March 2015. The data has been gathered from within the JVM via analyzing the startup parameters.

Which Java EE container is the most widely used in 2015?

From the 758 unique JVM runtimes we gathered the data from, we were able to identify the container vendor on 554 occasions, or in around 73% of the environments: 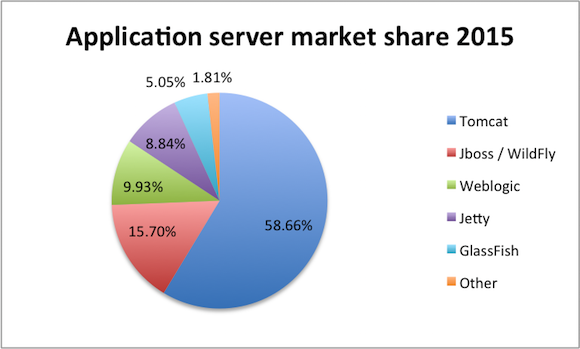 2015 was the year where Tomcat installation base exceeded the 50% threshold – the 58.6% market share left no question about the winner. In addition to Tomcat, next four vendors also having significant piece of the pie were:

The rest –  consisting of less than 2% of the installations, in which we detected some Resin servers and couple of OC4J instances.

Noticeably the IBM WebSphere is missing entirely, but in this regards our data is biased – as Plumbr Agents do not work with IBM JVM, the dataset is not representative in estimating IBM adoption rate. Most IBM WebSphere installations are deployed on top of the IBM own JDK, meaning that our data does not give fair insight to these deployments.

As we now have the similar data over three years, we can also see how the vendor popularity has behaved over time: 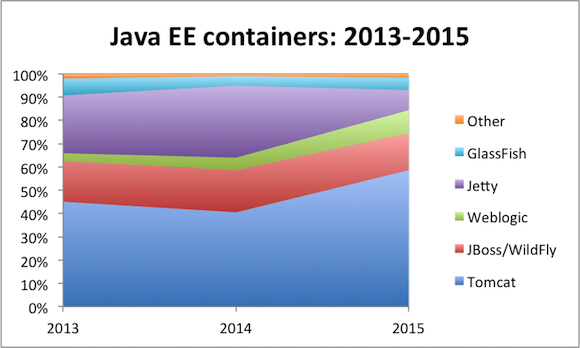 There is a grain of salt one should interpret these trends with – majority of these changes are most likely caused by the changed role Plumbr has started fulfilling for its users. Having transformed from the development tool to a monitoring solution, we are now seeing more and more production deployments, meaning that all the Jetty instances in developer boxes are no longer in our installation base.  Instead, the production deployments with different Java EE specification implementation are showing up.

Bad features of Java :
When you first learn to develop you see overly broad statements about different features to be bad, for design, performance, clarity, maintainability, it feels like a hack, or they just don’t like it.
http://geekonjava.blogspot.com/2015/06/bad-features-of-java.html

As we are not changing the Apache Tomcat headers in Apache TomEE it is not going to be clear how much of the Tomcat share here is actually complimented by TomEE enhanced distributions. We do know that many of our users are switching from more heavily overloaded Application Server distributions for the more lightweight, but equally stable and often more performant Apache TomEE distributions.