We are happy to announce that the JDBC Monitoring is now publicly available for all Plumbr users. After five weeks of private beta we gathered enough feedback and evidence that the detection is ready for general availability.

During the weeks we monitored billions of transactions and detected thousands of performance bottlenecks in hundreds of different JVMs deployed by 300+ companies. The insights gathered helped us to fine-tune the solution which as of today is available for all Plumbr users.

The launched solution is helping operations and engineering to be on the same page by having all the necessary information at your fingertips – with Plumbr monitoring for the expensive JDBC operations you no longer need to do impact analysis using one tool, find the offending query from the database monitoring tools and then manually find the source in your Java code composing and executing the operation.

In Plumbr, all this information is monitored and aggregated for you as seen from the following screenshot where you see a situation where Plumbr: 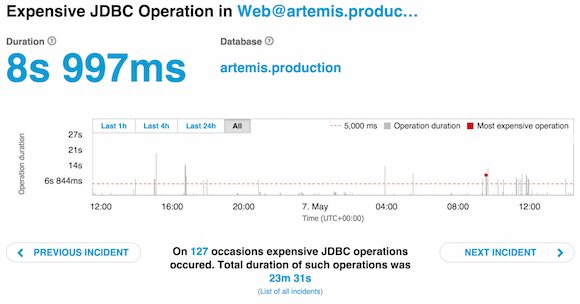 Equipped with this information, you can quickly triage the issue based on the severity of the problem. The next step is finding the actual root case, where we again equip you with the necessary information: 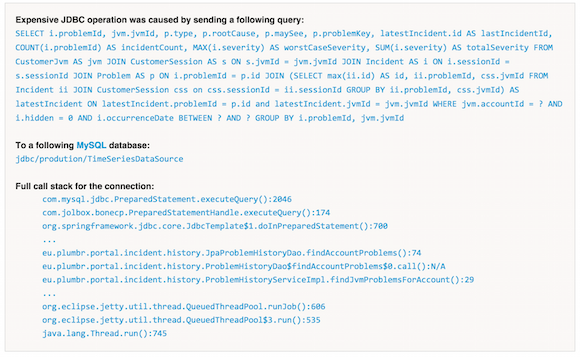 From the above you can see that all the 127 expensive JDBC operations were trying to execute the very same query against the very same datasource. Also, you can immediately drill down to the single line in source code executing the query – in this particular case the culprit was a prepared statement executed by the  eu.plumbr.portal.incident.history.JpaProblemHistoryDao.findAccountProblems() method on line 74.

In addition to fine-tuning of Plumbr slow query incident reports, the program also revealed interesting facts about the impact that slow queries have on the SLA of business critical applications. Plumbr detected slow queries in 75% of the applications that participated in our private beta program. A third of these applications regularly stalled user transactions for 10 seconds and more because of inefficient queries.

As of now, Plumbr JDBC Monitoring is officially supported for all major database vendors (with the notable exception being IBM DB2).

We expect to have results with the aforementioned list already during the next couple of months. In the longer horizon is the ability to expand the detection to other types of databases as well – the world in 2015 is no longer consisting just relational data storages accessed via JDBC and we expect to support all major noSQL vendors as well. Work in this regard is still in its infancy, so clear release dates cannot yet be scheduled.