What is allocation rate? 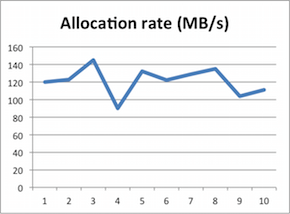 Phrases such as “unsustainable allocation rate” and “you need to keep your allocation rates low” seem to belong to the vocabulary of Java Champions alone. Complex, scary and surrounded by magic aura.

As it often happens, the magic disappears with a puff of smoke when you look at the concepts more closely. This post is trying to remove the magic from the mentioned terms.

What is allocation rate and why should I care?

Knowing this fact alone is not too beneficial though. If you can bear with me I will walk you through the practical use of the concept.

Facing high allocation rate can mean trouble for your application’s performance. From the practical standpoint, the impact is surfaced by Garbage Collection becoming a bottleneck. From the hardware standpoint, even commodity hardware can sustain several GB/sec of allocations per core, so in case your rates do not start exceeding 1 GB/sec/core, you can be rather comfortable that your hardware will not actually be the bottleneck.

So, when focusing on the GC, we can start with an analogy that is also true in the real world – if you create a lot of stuff, you tend to face a lot of cleaning afterwards. Knowing that the JVM is built with a garbage collecting mechanism, need to look into how allocation rate changes the frequency or duration of the GC pauses.

Let us start with the measurement of the allocation rate. For this let’s turn on GC logging by specifying -XX:+PrintGCDetails -XX:+PrintGCTimeStamps flags for the JVM. The JVM now starts logging the GC pauses in a similar way to the following snippet:

From the GC log above, we can calculate the allocation rate as the difference between the Young Generation size after the last collection completed and before the next one started. Using the example above, we can for example extract the following information:

This data can then be expressed in the following table calculating the allocation rate as deltas of the Young occupancy:

Having this information allows us to say that this particular piece of software had the allocation rate of 161 MB/sec during the period of measurement.

Now, being equipped with this information we can understand how the changes in allocation rate affect application throughput by increasing or reducing the frequency of GC pauses. First and foremost, you should notice that only Minor GC pauses cleaning the Young Generation are affected.  The frequency nor duration of the GC pauses cleaning the Old Generation is not directly impacted by allocation rate, but instead by promotion rate, a term that we will cover in our next post.

Knowing that we can focus only on Minor GC pauses, we should next look into the different memory pools inside the Young Generation. As the allocation takes place in Eden, we can immediately look into how sizing the Eden can impact the allocation rate. So we can have a hypothesis that increasing the size of Eden will reduce the frequency of minor GC pauses and thus allow the application to sustain faster allocation rates.

If you are still wondering why this can be true – if you stop your application threads for GC less frequently you can do more useful work. More useful work also happens to create more objects, thus supporting the increased allocation rate.

Now, before you jump to conclusion that “bigger Eden is better”, you should notice that allocation rate might and probably does not directly correlate to the actual throughput of your application. It is a technical measurement, contributing to throughput. Allocation rate can and will have an impact on how frequently your Minor GC pauses stop application threads, but to see the overall impact, you need to take into account also Major GC pauses and measure throughput not in MB/sec but in business operations your application provides.

I hope this makes it clear to you.